On World Polio Day, thousands of Rotary Clubs around the world will hold events and fundraisers to recognize our progress in the global fight to end polio. Today is World Polio Day, and as members of the Rotary Club of Hamilton we are proud to focus on ending Polio.

Our meeting today, on World Polio Day will include information about ending Polio. Over many years our club and members have raise funds and awareness to end Polio. There are several ways that you can help in ending Polio:

The Rotary Club of Hamilton was proud to have the iconic HAMILTON Sign lit in the colours of Polio (red & yellow) over night. We had our members as well as Rotarians from the Hamilton AM Club, Stoney Creek and the Hamilton Evening Clubs join us in front of the sign. We also had a Rotary Exchange Student from Croatia. We have loaded all the photos on our Facebook page and included a few here.

World Polio Day – We need your voice to help us end polio now. Get involved and spread the message so that we can end the second human disease in history. 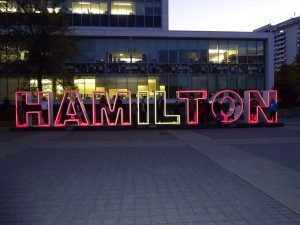 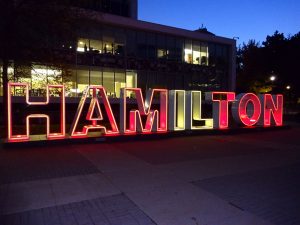