On April 6, 2018, Canadians were heartbroken to hear the news of the Humboldt Broncos bus crash. Of the 29 passengers, sixteen lost their lives and thirteen will all bear physical and emotional scars for life.

On April 7, 2018, Humboldt Broncos defenceman Logan Boulet succumbed to his injuries. His parents, Bernadine and Toby Boulet offered to donate his organs so that six lives could live on. They did so because Logan told his parents he was registering as an organ donor and that he was inspired by his coach and mentor Ric Suggitt. Ric passed on June 27th, 2017 and was also an organ donor and saved 6 lives.

What happened following this selfless act is nothing less than miraculous and became known across Canada as the “Logan Boulet Effect”.

Green Shirt Day was created to honour, remember, and recognize all the victims and families of that fatal crash and to continue Logan’s legacy by inspiring Canadians to talk to their families and register as organ donors.

The Logan Boulet Effect is leaving a lasting impression on Canadians. Since 2018, hundreds of thousands have taken the important step of talking with their families about their wish to become an organ and tissue donor, and many are confirming that decision by registering their intent to donate through their provincial organ donor registration system. While in 2018 we estimated over 100,000 Canadians registered in the weeks following the Humboldt crash, Green Shirt Day 2019 has inspired another hundred thousand or more to take action.

Logan’s legacy reminds us how important it is for Canadians to talk with their family about their organ donation wishes. It’s suggested that for every person who registers their intent to donate, they speak with an average of 4 others about organ donation. That means that 100,000 new registrants equals approximately 400,000 conversations.

In Canada, almost 90% of Canadians say they support organ donation, but only 23% have actually registered their intent to donate. Though donation rates have improved over the last ten years, there is more to be done as approximately 250 Canadians die annually waiting for an organ transplant.

Green Shirt Day is taking place April 7, 2020. It is a day to raise awareness of organ donation and register organ donors across Canada. Championed by the parents of Logan Boulet, a young hockey player on the Humboldt Broncos who became an organ donor after the terrible bus crash that took his and 15 other lives.  @greenshirtday #GreenShirtDay and #LoganBouletEffect

President Heather Moroz is wearing the official “Green Shirt”. Heather is a firm believer in the importance of organ donation as her Mother Alice received a life saving liver transplant. Be a donor and save lives! 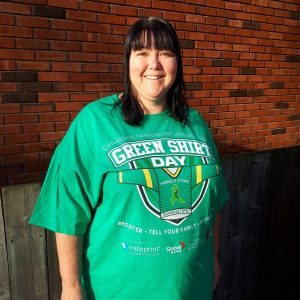